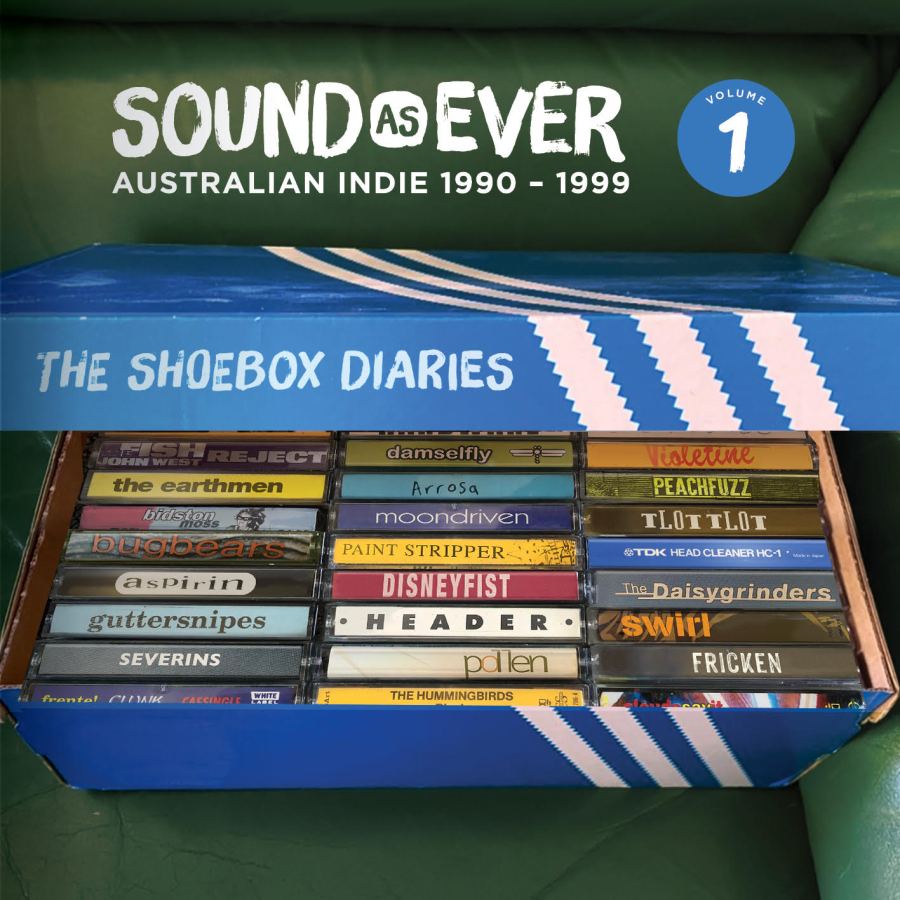 ‘The Shoebox Diaries’ is the first in a series of compilations from Sound As Ever – Australian Indie 90-99. The album features 20 rare or previously unreleased recordings from Australian 90s artists. This limited edition of individually numbered CDs (or digital downloads) can be purchased on our Bandcamp page.

Please note: profits from this compilation will be donated to Support Act. Support Act deliver crisis relief services to artists, crew and music workers as a result of ill health, injury, a mental health problem, or some other crisis that impacts on their ability to work in music.

“This comp is quite special, in that most of these songs haven’t ever been released or even heard before. We are truly thankful to all the bands who submitted their gems – this is such a stunning snapshot of 1990s era Australian music.

Thank you for your support and commitment to our tiny idea which has become a wonderful reality. We look forward to many more Sound As Ever adventures with you.” Jane Gazzo – April 2020

“Brunswick St, Fitzroy was a destination in the 1990s. Rent in the area was cheap and the locals were young and keen to be out on the streets soaking in the community around the venues. I was lucky enough to book bands at two of the key spaces throughout the decade: the Evelyn Hotel and the Punters Club. I started booking the Evelyn as a teenager. This was before the days of mobile phones, voicemail and email. You had to call the bands at their house and hope they would be at home. Weirdly I got to know quite a few of the key mums by name while leaving endless messages and waiting for calls back. It was often an epic task to book and confirm a single show. It felt like most of the bookers from the 80s were older barflies, alcoholics or drug dealers (the only people who were lucky enough to have the band’s home phone numbers!)….at least it felt like that at the time; everyone was cooler than me. I had the good fortune of meeting Wally Kempton, who was booker at the Tote at the time. He allowed me to ride my bike over and sit in the front bar copying out all the bands’ numbers from his A-Z book. Thanks Wal – owe you a beer. I was young, inexperienced, eager to learn, happy to work for nothing; perfect fodder for the music biz!

At the turn of the decade most of the shows were free entry, with occasional returning-from-overseas heroes like Dave Graney or Kim Salmon charging $5 for an ‘event’ show. Everything felt accessible to all, regardless of financial situation. All were welcome. Over the decade that bizarre term ‘alternative music’ (alternative to what?) helped the widest range of musicians all connect and find traction. The venues would host metal one night, folk the next, pop-punk and indie, electronic glitch and techno, reggae, dub, funk and anything else you could think of. The front bar became a melting pot of people from all scenes and all genres. I loved the diversity; loved the feeling that anything was possible. One night at the ‘What Is Music?’ event an artist on stage spent 45 minutes repeating a single line into a mic. The audience alternated between confusion, anger, restlessness, drunkenness, laughter, cheering, clapping, chanting; it was awesome. What was the line? “WHY-AM-I-A-PIE?”.” Richard Moffat – April 2020

The compilation features a rare previously unreleased song from Melbourne band aspirin. The band relocated to London in the late 90s and recorded some demos for London Records; even lip-synching the tune Toothpaste & Oranges on prime time UK TV. However, the band broke up in 1999 and the track has remained in the vaults until now to feature on The Shoebox Diaries.

Compilation concept and curation by Scott Thurling.
Artwork by Chris Rees.
Mastered by Ernie O at his Urban Fringe Compound.
Thanks to all Sound As Ever members for their input and enthusiasm.